Jesus – The Name Above All Names 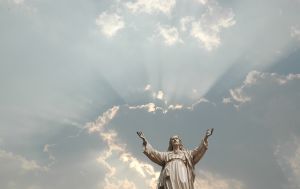 God the Father is the supreme authority who created everything through Jesus Christ [Colossians 1:15-18] and the Holy Spirit [Genesis 1:1-2].

“For the LORD is God, and he created the heavens and earth and put everything in place. He made the world to be lived in, not to be a place of empty chaos. ‘I am the LORD,’ he says, ‘and there is no other. I publicly proclaim bold promises. I do not whisper obscurities in some dark corner. I would not have told the people of Israel to seek me if I could not be found. I, the LORD, speak only what is true and declare only what is right. Gather together and come, you fugitives from surrounding nations.

What fools they are who carry around their wooden idols and pray to gods that cannot save!  Consult together, argue your case. Get together and decide what to say. Who made these things known so long ago? What idol ever told you they would happen? Was it not I, the LORD? For there is no other God but me, a righteous God and Savior. There is none but me.  Let all the world look to me for salvation! For I am God; there is no other. I have sworn by my own name; I have spoken the truth, and I will never go back on my word: Every knee will bend to me, and every tongue will confess allegiance to me.’  The people will declare, ‘The LORD is the source of all my righteousness and strength.’ And all who were angry with him will come to him and be ashamed.  In the LORD all the generations of Israel will be justified, and in him they will boast.”

When Jesus Christ came to be among humans, “Though he was God, he did not think of equality with God as something to cling to. Instead, he gave up his divine privileges; he took the humble position of a slave and was born as a human being. When he appeared in human form, he humbled himself in obedience to God and died a criminal’s death on a cross. Therefore, God elevated him to the place of highest honor and gave him the name above all other names, that at the name of Jesus every knee should bow, in heaven and on earth and under the earth, and every tongue confess that Jesus Christ is Lord, to the glory of God the Father.” [Philippians 2:6-12 New Living Translation] (my emphasis)

“[For I always pray to] the God of our Lord Jesus Christ, the Father of glory, that He may grant you a spirit of wisdom and revelation [of insight into mysteries and secrets] in the [deep and intimate] knowledge of Him, [b]y having the eyes of your heart flooded with light, so that you can know and understand the hope to which He has called you, and how rich is His glorious inheritance in the saints (His set-apart ones), [a]nd [so that you can know and understand] what is the immeasurable and surpassing greatness of His power in and for us who believe, as demonstrated in the working of His mighty strength, [w]hich He exerted in Christ when He raised Him from the dead and seated Him at His [own] right hand in the heavenly [places], [f]ar above all rule and authority and power and dominion and every name that is named [above every title that can be conferred], not only in this age and in this world, but also in the age and the world which are to come. And He has put all things under His feet and has appointed Him the universal and supreme Head of the church [a headship exercised throughout the church], [w]hich is His body, the fullness of Him Who fills all in all [for in that body lives the full measure of Him Who makes everything complete, and Who fills everything everywhere with Himself]. [Ephesians 1:17-23 Amplified Bible] (my emphasis)

God the Father has elevated Jesus’ name such that every knee, whether in heaven, on earth or under the earth (i.e. Satan and his demons) will bow and confess that Jesus is Lord. He is above all and above every title that can be conferred, not only in this age but also in the age to come.
No one can come to God the Father except through Jesus Christ [John 14:6] “And there is salvation in and through no one else, for there is no other name under heaven given among men by and in which we must be saved.” Acts 4:12 [Amplified Bible]
Have you received Jesus into your life?
How Do You Receive Christ into Your Life?